Modern grid-tied photovoltaic (PV) and energy storage inverters are designed with control capabilities that can support and/or enhance the existing global grid infrastructure.  Inverter-based generation is growing today in the residential, commercial, and utility segments.  This article will explore how modern inverter controls can have a positive effect on today’s evolving electrical grids in the utility segment.  I will explore the inverter protection mechanisms used to keep DC side faults and AC side faults from causing damage to the inverter.   Inverter grid supporting functions along with voltage and frequency ride through, provide key behaviors that both support and enhance grid reliability.  Today’s PV and energy storage inverters can be deployed individually and in a mixed design affording plant designers’ options for energy capture and grid support.  The following topics are as general as possible with some unavoidable linkage to SMA inverters.

Inverters today are classified by both market and design.  From a market perspective, the utility market is largely served by central inverters, which will be the focus of this article.  The commercial and industrial market is largely served by three-phase string, or mini-central, inverters.  The residential market is still dominated by single-phase string inverters and module-level micro inverters.  Central inverters, which have a much higher capacity compared to string inverters, are multi-megawatt generators designed for a utility scale deployment.  String inverters can range from a few kilowatts to hundreds of kilowatts.

From a design perspective, utility-scale central inverters are built to be the main generator in the following three distinct design categories: PV-Only, PV plus DC-Coupled energy storage, and AC-coupled energy storage.  The reference to coupling is the point at which the energy storage is introduced to the system.  For DC-coupling, the battery is connected to the PV inverter DC bus as shown in Figure 1.

For AC-coupling, the battery is connected to the system at the AC MV level as shown in Figure 2. 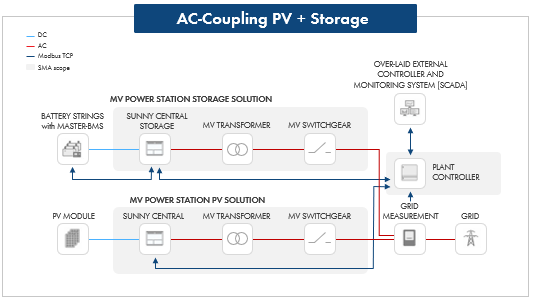 The following Figure 3 provides general guidance regarding grid behavior of these design categories:

Generator Owners (GOs) and utilities should use a mix of these designs to provide the required behavior on the grid.

The basic central inverter circuit can be described as follows:

DC Input: Provides the source of DC energy to the inverter.   This will be either PV, battery strings or both.  DC input circuits are protected typically by fuses.  Current monitoring on each individual input is available and is useful for monitoring PV array performance at a high level.

DC Bus: Provides a common point at which the DC energy is aggregated.   For central inverters, this bus is designed for the available current of the PV and/or battery source circuits connected to it.  The bus often employs surge protection and insulation monitoring.  For grounded PV arrays, the negative bus pole is grounded through a fuse, breaker or energy device designed to open the connection should a PV ground fault occur.

DC Switch: Provides an automatic disconnection of both DC poles to isolate the DC from the IGBTs.  The DC switches allow the inverter controls to connect the IGBTs to the DC source.   The DC switches are designed as high duty cycle devices that can open during maximum current flow from the PV array or battery.

IGBT Circuit: Provides the conversion from DC to AC.  The IGBT bridges used in many inverters today are configured in the B6 configuration.  The inverter control system sends a pulse width modulated (PWM) gate signals to the IGBT bridge causing it to produce a three-phase AC waveform as an input to the L-C filter circuit.

Figure 4. Topology of a B6 IGBT Configuration.

L-C Filter: Provides the necessary filtering of the raw AC output into a smooth sine waveform.  As the name implies, this is a filter comprised of a large choke and a bank of capacitors.  The capacitor bank is connected to the circuit via a contactor for control purposes.

MVT: Transforms the inverter AC output voltage to a medium voltage level for interconnecting to other inverter MVT’s and the project substation.  For utility-scale projects, the MVTs are typically designed to IEEE C57 standards which connect to medium voltage circuits from 12.47 kV to 34.5 kV in the U.S.   Modern inverter-duty MVTs are design to operate for the lifetime of the PV/Battery plant.  Extensive engineering produces MVTs designed to operate in the hottest climates on earth with the reliability expected from generation assets.

In this section we will explore the various inverter fault mechanisms and protections built into modern central inverters. These faults can be classified into four general categories: AC Grid Fault, DC Fault, Phase Lock Loop (PLL) Fault, and Internal Fault.

The invert responds to grid voltage and frequency on the AC port.   Inverters can also receive a transfer-trip signal from the utility for tripping.  The Inverter trips on frequency faults. It has a wide operating frequency window (typically 57 to 63 Hz). The inverter can be set to the following modes for voltage faults: Full Dynamic Support – Reactive current feed in, Partial Dynamic Support – Active and reactive current feed in is blocked during the fault and Disable (FRT off) – Inverter will trip on any disturbance.   AC trip settings are independent of the PLL.

Central inverters monitor the DC bus for faults.  Following are the typical DC port faults: DC Overvoltage - Some inverters trip on DC overvoltage, some inverters record high DC voltage but do not trip.  If DC voltage is <AC voltage*sqrt2, the PV field is disconnected from the inverter, DC Reverse Current – An AC surge can cause DC reverse current.  Central inverters open AC breaker and DC contactor when either a DC or AC fault occurs.

The PLL is an important building block of central inverters.  The PLL measures the voltage and generates an accurate fundamental wave (see diagram below for a 50 Hz grid).  The PLL needs some time to lock on to the grid voltage and frequency. Thus, the output of the PLL has a delay. That delay can be adjusted accordingly.  The PLL measures the fundamental frequency only; thus, harmonics do not disturb the zero-crossing measurement.  This provides an accurate frequency measurement.  PLL faults can occur within inverters if the inverter frequency trip points are set to a time below which the PLL can accurately determine grid frequency, i.e. a 3 ms time period may be too fast for the PLL to determine grid frequency.  There are two typical methods of measuring frequency: 1) Zero crossing of voltage waveform and 2) the PLL actively measures frequency by measuring the speed at which the voltage vector is rotating.  Both methods take some time (~100 ms). 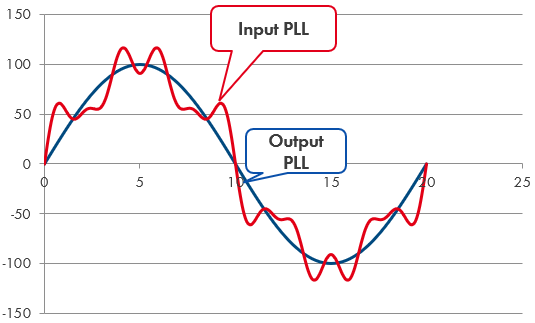 Figure 5. Input and output of a PLL. Time unit is ms.

Internal faults are categorized as any fault which is outside the boundaries of the previously mentioned faults.  For example, an internal communications processor board failure is a fault that could result in lost production depending on the nature of the fault.   Internal cabinet temperature, IGBT temperature, component failures, or other internal disturbances are all internal inverter faults.

Current central inverters can provide a host of functions to support distribution grid or the bulk power grid interconnections.  Voltage control uses reactive current to stabilize the AC voltage at the terminals of the inverter.  This characteristic works like a proportional controller and typically uses positive sequence current only.  The control keeps the voltage in a limited range and is designed to increase the stability of the grid. Inverters do not “fight” each other because impedances exist between them comprised of transformers and AC cabling.  The inverter voltage control characteristic can be combined with a plant controller to provide Point of Interconnection (POI) voltage controls that respond to both voltage transients and slower voltage variations.  With this combination voltage control setup, all plant inverters get reactive power commands from the plant controller (slow, ~150 ms) to maintain a POI voltage setpoint.  However, the individual inverters are also set to VoltVAr control to provide reaction to voltage transients (fast, <20 ms).

PV inverters can also be configured to provide grid voltage support 24/7 by providing reactive current at night. This function uses a small DC power supply to energize the inverter DC bus from the AC grid connection.  Once energized, the IGBTs can be commanded to provide reactive current at night.  In addition to voltage control, inverters can be set for reactive current injection during a Fault Ride Through (FRT) event.  This feature which tries to increase the positive sequence current while decreasing the negative sequence current.  The FRT controls can also be set to simply stop gating the IGBTs durint a fault.   This results in momentary cessation of all AC output current from the inverter, or limited FRT support.  FRT can also be disabled resulting in inverter tripping during grid voltage or frequency excursions.  Grid frequency support is achieved by adjusting inverter real power output.  This functionality is limited with PV inverters because the inverters are following the DC energy provided to them by the sun.

For a grid high frequency event, PV inverters can be easily set to reduce active power to help reduce the grid frequency.  However, the opposite is not easily achieved because, for a PV inverter to increase its active power output, it would need to be operating at less than 100% output and sunlight must be present at a level that would allow the inverter to increase its output.  For this reason, frequency control is typically accompanied by energy storage.  With an energy storage system, the design can incorporate the necessary reserve energy to provide robust inverter-based frequency control.

Weak grid and short circuit characteristics are also important topics as inverter-based generation continues to increase on utility grids.  Grid strength can have an adverse affect on inverter stability and harmonics.   For this reason, inverters are designed to operate within specification above a minimum Short Circuit Ration (SCR) of a grid interconnection as measured at the inverter terminals.  It is common to see modern central inverter manufacturers design inverters to operate down to a SCR of 2.  Operation below an SCR of 2 is certainly possible; but, additional system information and analisys will be needed.  For example, proximity to other large generators and/or loads can have an impact on operation below an SCR of 2.   Inverter-based generator short circuit contribution is much less than conventional rotating generators.  During a short circuit, inverter output current is about two times the nominal current for the peak value, and about 1.5 times the nominal current for about 50 ms.  After 50 ms, the inverter controls have the output current back to nominal.

In this last section, voltage, and frequency ride through will be discussed.  These functions are typically combined under the Fault Ride Through (FRT) name.  FRT is the inverter’s ability to stay online and provide a grid function during a fault without tripping.  Utilities determine the FRT requirements of each interconnection.  Typically, for Distributed generation (DG) plants, inverter-based generators are expected to trip offline during disturbances as specified by IEEE1547.  Bulk Power System (BPS) generators are typically configured to provide reactive current during the disturbance and remain online to ensure the reliability of the BPS.  BPS FRT is typically governed by NERC PRC-024 which specifies the continuous operation regions of voltage and frequency.  The IEEE 2800 standard captures the needs of NERC and add further definition and enhancements.Inverter advancements have improved dramatically in the last decade to become a much more reliable and trusted member of the family of generators.  I believe inverters are finally out of their rebellious teenage years and can now sit at the table with the more mature members of the generator family.